Amazon can crush your business with better customer acquisition, faster shipping, cheaper shipping, easy returns, and many other things that you probably don’t even know about.

There are five steps in a bulletproof ecommerce sales funnel, and in this episode, we’re going to be talking about the first two, and arguably the most important, steps that companies like McDonald’s, Starbucks, and Amazon use to crush their competition.

Why only the first two steps?

Well, because they’re the most important steps of a bulletproof ecommerce sales funnel, yet most ecommerce companies aren’t executing these two steps and they’re missing out on the ability to convert more customers cheaper and faster than everybody else, which means they’re also missing out on a ton of potential long-term revenue. 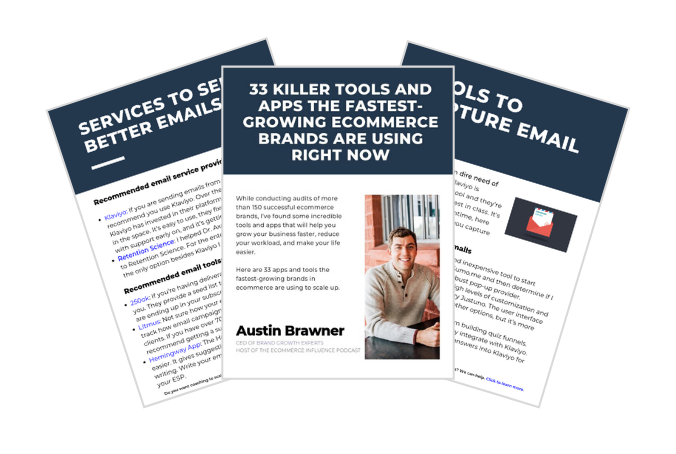 275: Why A Customer First Strategy Is Key To Getting Lasting Results

265: The Marketing Formula that Oral Essentials Used to Double The Business Twice in Two Years

261: Q4 Predictions For Online Retailers: The Case For (And Against) A Massive Quarter

256: Profit Series Part 3: How To Increase Your Customer Lifetime Value

247: What It’s Like to Manage the Global Marketing Strategy for a 10-Figure Business

BONUS: Thriving on Chaos: How To Lead Your Ecommerce Business During Uncertain Times

236: 6 Things You Can Do Today To Grow Your Business

222: How to Survive Q4 Without Losing Your Mind

213: How this Wonderkid became a DTC Guru Before Age 25

211: From Seminary to Shopify Plus: A Conversation About Brands

206: How to Host Your Own Quarterly Business Offsite (Our Process)

204: How To Build A Baller Quiz Funnel On a Tiny Budget

203: Why You Should Stop Selling Yourself Short and Think Like A Billionaire

201: What To Do When You’re Banned From FB, Google, and Amazon

200: How To Become A More Effective Executive

196: The Ugly Truth About Why Your Business Isn’t Scaling

193: “Must Know” Elements of Successful Ecom Design Most Business Forget

192: Tactics for Increasing Customer Lifetime Value (and How to Measure It)

178: You’re Treating Your Customers Equally (And Its Costing You Money)

168: How to Manage Your Marketing At Scale

155: How to Crush it With Better Customer Experience

148: Ecommerce Marketing Strategy: What Will Get You To 8 Figures?

144: 3 Simple Levers You Can Use to Grow Your Ecommerce Business

114: Engineer More Sales for your Business with James Schramko

113: How to Maximize Your Conversions for the Holidays with Erik Christiansen

108: Secrets of a Master Merchant: How To Turn One Purchase Into Many (Instantly)

105: What Famous Copywriters Don’t Want You To Know About Writing Copy

097: Sean Kelly, Snack Nation – How To 15x A Subscription Ecommerce Business (& Why Subscription Will Work For You)

094: The Top 7 Things We’ve Learned About Building A Successful Ecommerce Business Since Starting This Podcast

075: The Incredible Power Of Referral Marketing & How To Set It Up For Your Ecommerce Store

066: How To Extract More Gold Through Pinterest Marketing, The Newest Ecommerce “Gold Rush”

063: Sam Mallikarjunan, Hubspot – Why The Ecommerce “Gravy Train” Is Coming To An End, And How To Keep Riding It With Inbound Marketing

060: T. J. Gentle & Andrew Scarbrough – Getting Rid Of Customer Comparison Shopping Once And For All

059: Roger Dooley – Why 95% Of Your Marketing Is Ineffective And What To Do About It

058: David Meerman Scott – Nobody Cares About Your Product, And What To Do About It

056: Joanna Wiebe – How You Should Write Ecommerce Copy, Even If All Of Your Competitors Sell The Same Exact Thing

054: Ryan Deiss – The 5 Step Customer Value Optimization System With The King Of Conversion

045: “There’s No Such Thing As An Impulse Purchase,” Apply The Jobs To Be Done Framework To Your Ecommerce Store For More Sales – Chris Spiek, The Re-Wired Group

044: Build Your Ecosystem So That You Own As Much Of The Ecommerce Customer Experience As Possible – Ken Johnson, Manpacks

041: Creating Partnerships With Other Brands That Have Your NEXT Customer As Their CURRENT Customer – Andrew Davis, Brandscaping

040: Why You Need To Eliminate Your Buyer Persona And Replace It With The Jobs To Be Done Framework

038: How To Create A Best Customer Retention Marketing Plan For Ecommerce – Strategy Session

035: How To Use Video To Acquire More Ecommerce Customers – James Wedmore, JamesWedmore.com

034: 3 Types Of Buyers And How To Sell To Them – Strategy Session

030: Getting A 259% ROI With Native Advertising In Ecommerce – Strategy Session

026: 3 Reasons Why You Are NOT An Online Business – Strategy Session

025: Using Crowdsourcing In Ecommerce To Go From A $1,000 Startup To A $30 Million Plus Behemoth – Jake Nickell, Threadless.com

020: How to Build An Online Community For Your eCommerce Store – Candid Conversation

014: How To Structure Your Ecommerce Analytics Account In A Way That Will Actually Impact The Bottom Line – Candid Conversation

008: How To Create A Cart Abandonment Recovery Program That Recovers 8% To 15% Of Your Sales – Candid Conversation

005: How To Acquire 15-20% Of Your Customers Through Referral Marketing – Brad Kam, Curebit

002: How Evan Prepared His Website For the Hit Show Shark Tank & How He Boosted Sales by 14.97% – Evan Mendelsohn, Tipsy Elves